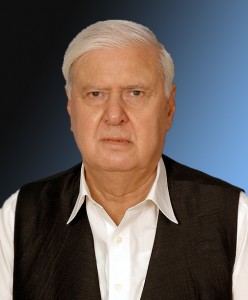 Aftab Ahmad Khan Sherpao (Pashto: آفتاب احمد خان شېرپاو‎; Urdu: آفتاب احمد خان شیر پائو ‎) (born 20 August 1941)[2] is a senior Pakistani political leader, the head of Qaumi Watan Party, and was the 35th Federal Interior Minister of Pakistan. Prior to this assignment he was working as the Federal Minister for Water and Power (WAPDA), Minister for Kashmir Affairs and Northern Areas and States & Frontier Regions (KANA & SAFRON) and Minister for Interprovincial Coordination. Sherpao has also served as the 14th and 18th Chief Minister of the Khyber Pakhtunkhwa province of Pakistan. He belongs to Ghauri family of Gujjars from Charsadda and his wife belongs to Kakar family of Pashtun.

Education and Army Career
Aftab Khan was educated at Lawrence College Murree, Edwardes College, Peshawar and Pakistan Military Academy, Kakul, Abbottabad. After passing out from Pakistan Military Academy with 34th Long Course in 1965, he joined Armoured Corps in the Probyns Horse Regiment, seeing action in both the ’65 and ’71 wars. Over a period of 12 years he rose to the rank of Major.

It was after the assassination of his elder brother Hayat Sherpao in a bomb blast in 1975 that Aftab jumped into the political arena. The then Prime Minister of Pakistan Zulfikar Ali Bhutto asked him to take an early retirement from his military career and afterwards nominated him as Pakistan Peoples Party’s (PPP) provincial vice-president. Aftab Khan was thus a stalwart of the original unified Pakistan Peoples Party from Khyber Pakhtunkhwa province of Pakistan. Later Sherpao established his own party Qaumi Watan Party.

Differences with Benazir Bhutto and PPP (Sherpao)
However, in the mid nineties he developed serious differences with Benazir Bhutto when Maj-Gen Naseerullah Babar mistakenly suspected his role in undercutting him through allotment of party tickets in Nowshehra. Finally leading to the formation of his own faction of the party called PPP (Sherpao). In the 2002 general elections he struck key alliances within Khyber Pakhtunkhwa and was elected to both the provincial and national assemblies and his party performed relatively well amidst the rout of his former party and the Muslim league in Khyber Pakhtunkhwa.

Qaumi Watan Party
In October 2012 prior to Elections 2013 Sherpao announced foundation of Quami Watan Party with the nationalist approach towards existing issues and problems. Sherpao’s PPP-Sherpao was renamed Quami Watan Party in a well-attended convention at his residence in Hayatabad.

In Election 2013, Sherpao made an impressive showing where 8 members were elected as KPK assembly through general seats and Aftab Sherpao won seat in National Assembly.

Interior minister and War on Terror
Known for his sharp administrative skills, he was appointed as the Minister for Water and Power in 2002. In addition to this charge, Sherpao was also made Minister for Kashmir Affairs and Northern Areas & States and Frontier Regions (KANA & SAFRON) and Inter-Provincial Coordination. Subsequently after a cabinet re-shuffle in 2005, he was appointed as the federal interior minister. He has been a prominent figure due to terrorist attacks and fighting in the tribal areas as well as Balochistan. He was re-elected to Pakistan’s National Assembly and Khyber Pakhtunkhwa Provincial Assembly in the 2008 elections.

Family influence in politics
Aftab’s family tree and cross-marriages in other influential families has given him a unique edge over his political opponents. Aftab’s family has for long been a prominent and influential family in the Khyber Pakhtunkhwa. The family belongs to the prominent Muhammadzai tribe with his father Khan Bahadur Ghulam Haider Khan being one of the most influential leaders in NWFP supporting the Pakistan movement. His father Khan Bahadur Ghulam Haider Khan Sherpao was a key figure in the Pakistan freedom movement and an influential political leader.

His elder brother Hayat Muhammad Khan Sherpao was a founding member of the Pakistan Peoples Party, former Federal Minister and Khyber Pakhtunkhwa Governor and senior minister. Aftab himself is the son-in-law of the brother of Sardar Abdur Rab Nishtar, one of the pioneers of the Pakistan freedom movement. His eldest son, Sikandar Hayat Khan Sherpao, has already jumped into provincial politics and has been elected to the provincial assembly of the Khyber Pakhtunkhwa twice besides having served as senior minister.

Militant attacks on Sherpao
28 April suicide attack
On 28 April 2007 he was injured in a suicide attack in his home area of Charsadda, 18 miles northeast of Peshawar, the capital of Khyber Pakhtunkhwa.[1] The attack shook his confidence in Musharraf’s policy toward the militants, which has included a series of peace deals and has prompted Sherpao to support a 15-page document also presented to the US National Security Council in June 2007 warning that Islamists are spreading beyond the country’s lawless tribal areas and that without “swift and decisive action,” the growing militancy could engulf the rest of the country.

Pak-Afghan Joint Peace Jirga
To reaffirm and further strengthen the resolve of two brotherly countries to bring sustainable peace in the region, the Afghan-Pak Joint Peace Jirga was convened in Kabul, Afghanistan on 9 to 12 August 2007. This was the first historic event of its kind that opened a channel of people-to-people dialogue in which around 700 people including members of the parliaments, political parties, religious scholars, tribal elders, provincial councils, civil society and business community of both countries participated.

This jirga was aimed at removing differences between the two countries and bring Pashtuns on both sides of the border together to tackle problems and end terrorism and extremism. Aftab Ahmad Khan Sherpao, being a prominent and respected Pashtun leader as well as being a pioneer of this cause was given the honour of being nominated chairman of this Pak-Afghan Joint Peace Jirga.

The Jirga, generally thought to be a success, agreed on a number of issues and made a six-point recommendation list to be implemented by both governments. Despite Sherpao’s efforts and a succession of calls by a number of leaders on both sides of the border, the Jirga has not been convened again.