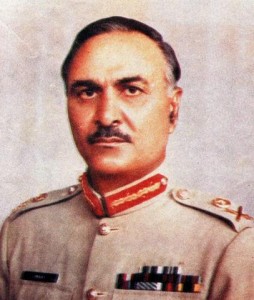 Lieutenant General Imran Ullah Khan (born 3 December 1932) is a retired Pakistan Army three star General. He remained the Governor of Balochistan province in PPP-led government from May 1994 to May 1997.

Imran Ullah Khan was born on 3 December 1932 to a family of shamozai which is local landlords family in the village now town of Utmanzai in Charsadda District of Khyber-Pakhtunkhwa province of Pakistan. His father was Major Saadullah Khan who was a direct descendant of Malik Utman who founded the village/town of Utmanzai. The family belonged to the Sharif Khel Clan of the Pakhtuns

Serving Pakistan army he took part in 1965 war as a captain and in 1971 war as a Battalion Commander. He also participated in the Siachin operation as a Corps Commander.

General Imran Ullah khan has had the privilege of commanding an infantry brigade on the Line of Control. As a Brigadier, he also had the distinction of holding the appointment of Director of Military Training Pakistan Army. In January 1978 he was appointed the Commandant of Pakistan Military Academy Kakul. He held this coveted post for over four years both as a Brigadier and Major General. In May 1982 he was posted as General Officer Commanding of the 10th Infantry Division at Lahore.

In May 1984 he was posted as Adjutant General of Pakistan Army at GHQ and in May 1987 he was posted to command the X Corps, the largest Corps of Pakistan Army, which is one of the two corps on the Line of Control. In this position he was responsible for operations in Siachen. He is credited with Pakistani successes at Chumik and in Operation Qidaat.

General Imran Ullah Khan retired from the Army in May 1991 having put in 36 years of commissioned service and in May 1994, he was appointed as the Governor of Balochistan by Prime Minister Benazir Bhutto. He resigned from Governorship for personal reasons in May 1997.