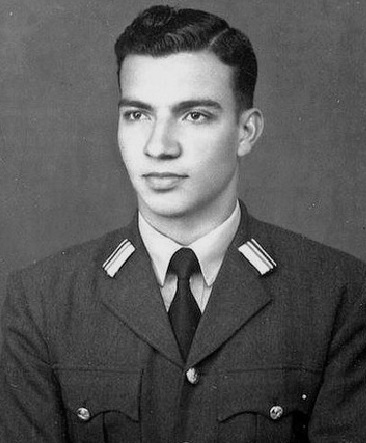 Air Commodore Zafar Masood: Mention of 2 Old Gallians in the top fighter 13 pilots of PAF ever... Wing Commander Mervyn Leslie Middlecoat (July 1940 – 12 December 1971) was a Pakistan Air Force (PAF) fighter pilot who was involved in a number of aerial battles during the 1965 and 1971 Indo-Pakistani wars, before being shot down on 12 December 1971. He was credited with several air-to-air kills and was one of a number of distinguished Pakistani strike and fighter pilots of the period. Before his death he was stationed in Karachi, Pakistan where he flew the F-104 Starfighter.

Middlecoat was born in Ludhiana, India, in July 1940. His parents were Percy and Daisy Middlecoat. He received his early education at St. Anthony’s High School (Lahore) and Lawrence College Murree. Middlecoat joined the PAF, passed out of the 16th General Duty Pilot (GDP) Course in 1954, and won the Best Performance Trophy in ground subjects.

Soft-spoken and mild mannered, Middlecoat was considered to be the epitome of an officer and a gentleman, besides also being an outstanding pilot. Although he flew a number of different aircraft during his service career, he came to master the F-104 Starfighter.

On 27 September 1957, he married Jane, the daughter of a Christian family from Karachi. On 21 October 1959, a daughter named Leslie Ann was born to the Middlecoats. The first PAF F-104 that landed in Pakistan was flown by Mervyn Middlecoat. F-104s were inducted in the 9th Squadron (known as Griffins) which is the first elite fighter squadron of the PAF. It is worthwhile to mention that the best PAF pilots were inducted into the PAF squadron.

He would later command the squadron as a Squadron Leader and was doing so during the 1965 war. Leading from the front, he kept the spirits of his boys high and guided his pilots in a highly professional manner.

During the three-week war, Middlecoat flew 17 air defence sorties and three photo reconnaissance missions over forward Indian airbases. For his leadership and devotion to duty, he was awarded the Sitara-i-Jurat, the third highest award in the Pakistani military, in 1965.

Promoted to Wing Commander, at the outbreak of war on 3 December 1971 Middlecoat was on a training visit abroad in Egypt. He was one of the six strike command officers who were selected to conduct the aerial operation “Amritsar Radar”, and was assigned to attack the heavily defended Indian airbase at Jamnagar on 12 December, the day after his return.

After strafing aircraft parked on the runway, Middlecoat and his wingman were forced to abort their mission after they were bounced by two IAF MIG-21 aircraft from No. 47 Squadron IAF. Middlecoat quickly reduced altitude, and maintained a high speed. He managed to deflect the first missile, however at a range of just 300 metres (330 yd) he was shot down over the Gulf of Kutch. The Indian pilot that shot him down, Flight Lieutenant Bharat Bhushan Soni, saw Middlecoat eject into the Arabian Sea, and contacted a nearby IAF base to send a rescue team, however he was nowhere to be found when they reached the site. Middlecoat had ejected in shark infested waters and it was considered unlikely that he survived. Declared missing in action, he was posthumously awarded a Bar to the Sitara-i-Jurat. His remains were never found.

The aviator King Hussein of Jordan wrote to Middlecoat’s widow stating that his death was a personal loss for the King, requesting to bury him with the Jordanian national flag under his head if he was to be wrapped in the Pakistani flag. Middlecoat had fought for the King earlier during the Six Day War with Israel.

On the outbreak of war on 3rd December 71, Wing Commander Mervyn L Middlecoat was on a training visit abroad. He returned to Pakistan immediately and joined operations with such keen interest that he inspired all squadron pilots. The day after his arrival he was detailed on a strike mission to the heavily defended Jamnagar airfield. While returning after the successful mission he was engaged by 2 enemy Mig-21s. In the encounter his aircraft was hit by an enemy missile. He was heard to be ejecting in Indian territory and was officially declared missing in action. For his devotion to duty, determination and courage he was awarded a Bar to the Sitara-i-Jurat and Sitara-i-Basalat. (See PAF History 1989).