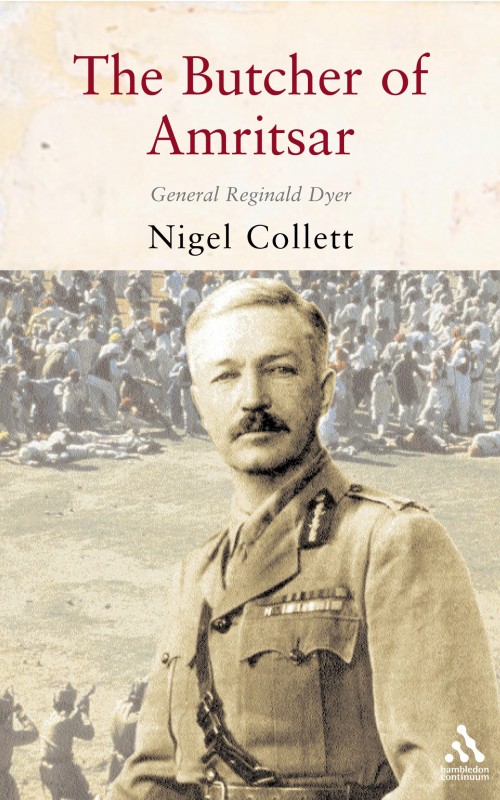 Colonel Reginald Edward Harry Dyer CB (9 October 1864 – 23 July 1927) was an officer of the British Army who, as a temporary brigadier general, was responsible for the Jallianwala Bagh massacre in Amritsar (in the province of Punjab). Dyer was removed from duty, but he became a celebrated hero in Britain, particularly among people with connections to the British Raj. Some historians argue the episode was a decisive step towards the end of British rule in India.

Dyer was born in Murree, in the Punjab province of British India, which is now in Pakistan. He was the son of an Indian-born Anglo brewer who managed the Murree Brewery in the town of Ghora Gali. He spent his childhood in Murree and Shimla and received his early education at the Lawrence College Ghora Gali, Murree and Bishop Cotton School in Shimla. He attended Middleton College, County Cork, Ireland between 1875 and 1881. In 1885, soon after graduating from the Royal Military College, Sandhurst, he was commissioned into the Queen’s Royal Regiment (West Surrey) as a lieutenant, and performed riot control duties in Belfast (1886) and served in the Third Burmese War (1886–87). He was then transferred to the British Indian Army, initially joining the Bengal Staff Corps as a lieutenant in 1887. He was attached to the 39th Bengal Infantry, later transferring to the 29th Punjabis. He served in the latter in the Black Mountain campaign (1888), the Chitral Relief (1895) (promoted to captain in 1896) and the Mahsud blockade (1901–02). In 1901 he was appointed a deputy assistant adjutant general. He was then transferred to the 25th Punjabis.

In August 1903 he was promoted to major, and served with the Landi Kotal Expedition (1908). He commanded the 25th Punjabis in India and Hong Kong and was promoted to lieutenant-colonel in 1910. During the First World War (1914–18), he commanded the Seistan Force, for which he was mentioned in despatches and made a Companion of the Order of the Bath (CB). He was promoted colonel in 1915, and was made a temporary brigadier-general in 1916. In 1919, about a month after the Jallianwala Bagh massacre, in the Third Anglo-Afghan War, his brigade relieved the garrison of Thal, for which he was again mentioned in despatches. For a few months in 1919 he was posted at the 5th Brigade at Jamrud.

In 1919 the European population in Punjab feared the Indians would overthrow British rule. A nationwide hartal (strike action), which was called on 30 March (later changed to 6 April) by Mahatma Gandhi, had turned violent in some areas. Authorities were also becoming concerned by displays of Hindu-Muslim unity. Michael O’Dwyer, the Lieutenant-Governor of Punjab, decided to deport major agitators from the province. One of those targeted was Dr. Satyapal, a Hindu who had served with the Royal Army Medical Corps during the First World War. He advocated non-violent civil disobedience and was forbidden by the authorities to speak publicly. Another agitator was Dr. Saifuddin Kitchlew, a Muslim barrister who wanted political change and also preached non-violence. The district magistrate, acting on orders from the Punjab government, had the two leaders arrested. On 9 April 1919, crowds soon gathered at a bridge leading into the Civil Lines, where the British lived, demanding a release of the two men. Unable to hold the crowd back, troops panicked and began firing, killing several protesters.

The shooting of protesters resulted in a mob forming and returning to the city centre, setting fire to government buildings and attacking Europeans in the city. Three British bank employees were beaten to death, and Miss Marcella Sherwood, who supervised the Mission Day School for Girls, was cycling around the city to close her schools when she was assaulted by a mob in a narrow street called the Kucha Kurrichhan. Sherwood was rescued from the mob by local Indians. They hid the teacher, who was hurt in the beating, before moving her to the fort. This attack, and others against Europeans, angered Dyer[weasel words] who was the commandant of the infantry brigade in Jalandhar. He arrived on 11 April to assume command, then instructed the troops of the garrison regarding reprisals against the population.

Dyer is notorious for the orders that he gave on 13 April 1919 in Amritsar. It was by his command that 50 troops, including 25 Gurkhas of 1st/9th Gurkha Rifles, 25 Pathans and Baluch, 54th Sikhs and 59th Sindh Rifles, all armed with .303 Lee–Enfield rifles opened fire on a non-violent gathering of unarmed civilians, men, women and children, at the Jallianwalla Bagh in what later came to be known as the Amritsar massacre.

The civilians had assembled at Jallianwala Bagh to participate in the annual Baisakhi celebrations which are both a religious and a cultural festival of the Punjabis. Coming from outside the city, they may have been unaware of the martial law that had been imposed. The Bagh-space comprised 6 to 7 acres (28,000 m2) and was walled on all sides except for five entrances. Four of these entrances were very narrow, admitting only a few people at a time. The fifth entrance was blocked by the armed soldiers, as well as by two armoured cars with machine guns (these vehicles were unable to pass through the entrance). Upon entering the park, the general ordered the troops to shoot directly into the gathering. Shooting continued until his troops’ supply of 1,650 rounds of ammunition was almost exhausted. The shooting continued unabated for about 10 minutes.

Dyer is reported to have, from time to time, “checked his fire and directed it upon places where the crowd was thickest”; he did this not because the crowd was slow to disperse, but because he (the general) “had made up his mind to punish them for having assembled there.” Some of the soldiers initially shot into the air, at which General Dyer shouted: “Fire low. What have you been brought here for?” Later, Dyer’s own testimony revealed that the crowd was not given any warning to disperse and he was not remorseful for having ordered his troops to shoot.

The worst part of the whole thing was that the firing was directed towards the exit gates through which the people were running out. There were 3 or 4 small outlets in all and bullets were actually rained over the people at all these gates… and many got trampled under the feet of the rushing crowds and thus lost their lives… even those who lay flat on the ground were fired upon.

Dyer suffered a series of strokes during the last years of his life and he became increasingly isolated due to the paralysis and speechlessness inflicted by his strokes. He died of cerebral haemorrhage and arteriosclerosis in 1927. On his deathbed, Dyer reportedly said:

So many people who knew the condition of Amritsar say I did right…but so many others say I did wrong. I only want to die and know from my Maker whether I did right or wrong.

—The Butcher of Amritsar: General Reginald Dyer by Nigel Collett

The Morning Post remembered him in an article titled “The Man Who Saved India” and “He Did His Duty” but the Westminster Gazette wrote a contrary opinion: “No British action, during the whole course of our history in India, has struck a severer blow to Indian faith in British justice than the massacre at Amritsar.”

Noted historian Gordon Johnson commented that “…Dyer’s actions ran counter to Army regulations. These required that force should be constrained by what was reasonable to achieve an immediate objective; minimum, not maximum, force should be deployed. Moreover, proper warning had to be given. On April 13, 1919, as demonstrated by Collett, Dyer ignored this. While he may have believed the Raj was threatened, and may have thought the mob was out to attack him and his soldiers, this does not justify his cavalier abuse of procedure and his indifference to Indian suffering. In so behaving, he brought not only death to the innocent but also destroyed himself and undermined the empire in which he took so much pride.

The official reports quote 379 dead and over 1,000 injured. However, public enquiry estimates, from Government civil servants in the city (commissioned by the Punjab Sub-committee of Indian National Congress) as well as counts from the Home Political cite numbers well over a thousand dead. According to a Home Political Deposit report, the number was more than 1,000, with more than 1,200 wounded. Dr. Smith, a British civil surgeon at Amritsar, indicated over 1,800 casualties. The deliberate infliction of these casualties earned General Dyer the epithet of the “Butcher of Amritsar” in India.